China’s Economic Transformation: The Emergence of a New Frontier 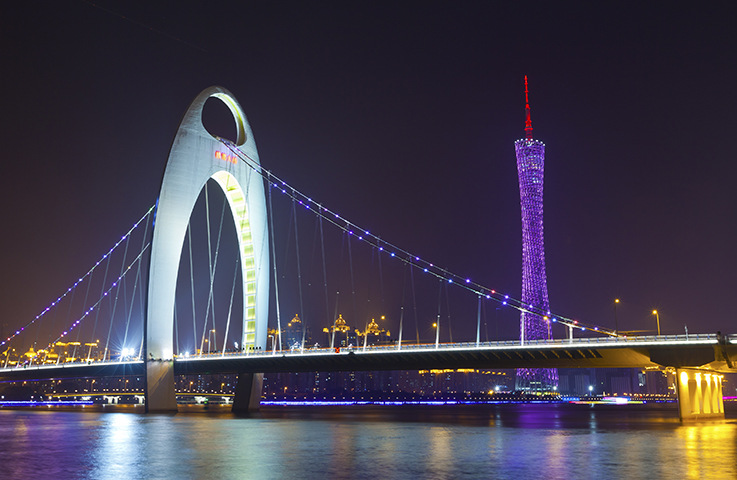 The China we know is changing. An exciting new era of growth is unfolding, creating fresh opportunities for global investors.

After decades of rapid industrialization propelled the economy to be the second-largest in the world, the government now seeks a more sustainable growth model. To do that, policymakers have boosted domestic consumption and services, narrowing the urban-rural development gap and transitioning its manufacturing sector to one that is higher up the value chain by investing in cutting-edge technologies like artificial intelligence and robotics.

At the same time, China is deepening its global economic influence with the ambitious “One Belt, One Road” infrastructure initiative, connecting 65% of the planet’s population1 across Asia, Europe, the Middle East, and Africa.

China’s great transition will yield opportunities different from those seen in the past three decades and may require a fresh investment approach. Here, we explore just a few transformative dynamics of the “new” China.

From high-speed to high-quality

China’s economic miracle – its rapid growth expansion since 1980 – has brought an unparalleled amount of wealth creation and prosperity to hundreds of millions of people.

Today, China is already the largest contributor to global GDP in purchasing power parity terms, a trend that will most likely intensify as we head into the next decade.

China Is the Top Contributor to World GDP Growth 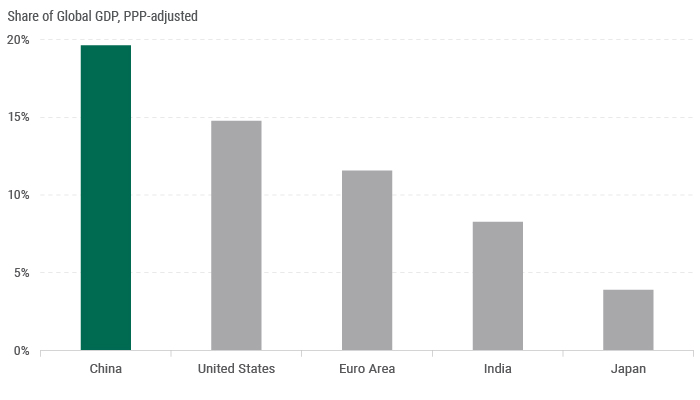 Source: IMF as of January 2019. PPP – purchasing power parity. For illustrative purposes only. We are not soliciting or recommending any action based on this material. Any opinions, projections, estimates, forecasts and forward-looking statements are only valid as of the date of this document and are subject to change.

In fact, over the next few years, we expect China to grow twice as fast as the US and faster than most economies in the world in real GDP terms. In short, China is set to power global economic activity for some time.

Source: PineBridge Investments Calculations as of January 2019. Any opinions, projections, estimates, forecasts and forward-looking statements are only valid as of the date of this document and are subject to change.

In order to maintain China’s economic expansion, policymakers have chosen to bolster its “new economy” growth drivers like consumption and information technology and pivot away from China’s “old economy,” or industrial-led, growth.

“New” China’s Return on Equity Is Outpacing the Old 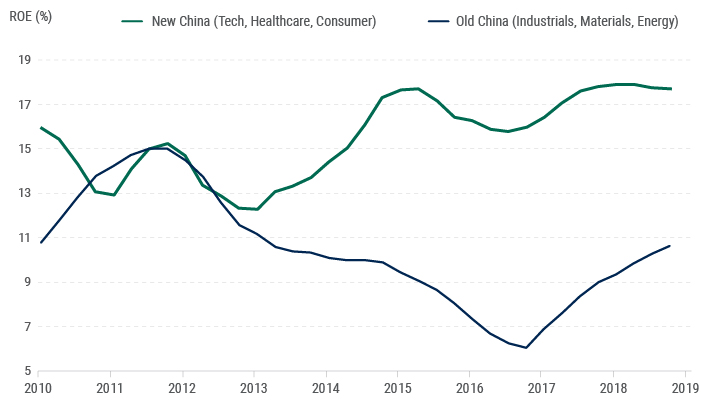 Source: MSCI, Bloomberg as of 31 December 2018. For illustrative purposes only. We are not soliciting or recommending any action based on this material.

Over the last three decades, rapid economic growth and rising incomes have pulled out hundreds of millions of Chinese households from poverty. As a result, the newly wealthy Chinese have become a global source of demand to contend with. For example, Chinese consumers have been the world’s top tourism spender since 20122, and total retail e-commerce sales in China have eclipsed those of the US since 20133accounting for 56% of the value of global retail e-commerce transactions by the end of 2019.

Policymakers understand the importance of China’s consumer class and have outlined their vision of a “Chinese Dream” complete with financial and labor-market reforms aimed at strengthening the economic standing of Chinese households. Included in these efforts are the passage of the recent household tax reform, the auto tariff tax cut, and pledged support for internet infrastructure. Robust economic growth combined with these policy initiatives could lead to the World Bank recognizing China as a “high income” country by 2023.

The “Chinese Dream” Is Well Underway 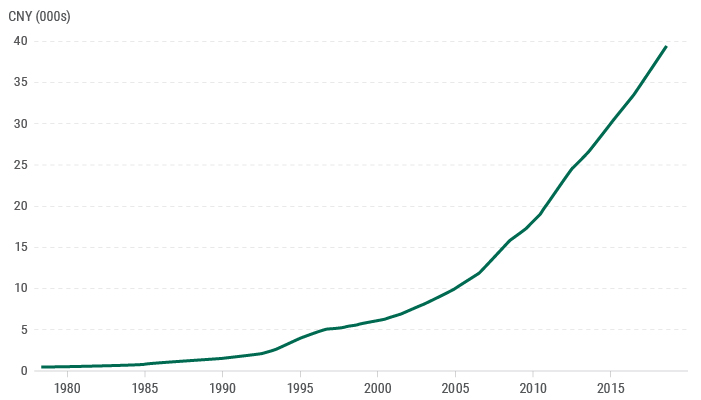 Source: Macrobond, NBS, PineBridge Investments Calculations as of February 2019.Any opinions, projections, estimates, forecasts, and forward-looking statements are only valid as of the date of this document and are subject to change.

Companies that have a direct link to the consumer sector – including consumer discretionary and staples, automobiles, travel, and tourism – stand to benefit from China’s increasing reliance on consumption-led growth.

Chinese companies are quickly moving forward in technology and R&D

The second pillar of China’s structural transformation is its industrial transition up the value chain. To compete with the likes of Japan, South Korea, and Germany, both public and private enterprises in China have recently accelerated research and development (R&D) spending, with an average annual growth rate of 11% over the past five years.4 The money has been well spent; this year, China ranks 17th in World Innovation Index – just behind France and ahead of Canada – up from 29th only four years ago. Behind this improvement have been significant amounts of venture capital investments in key types of digital technologies, such as virtual reality, autonomous vehicles, 3-D printing, robotics, drones, and artificial intelligence (AI)5. With China already regarded as the second-largest AI ecosystem in the world6 , the government aims to make it the global leader by 2030. 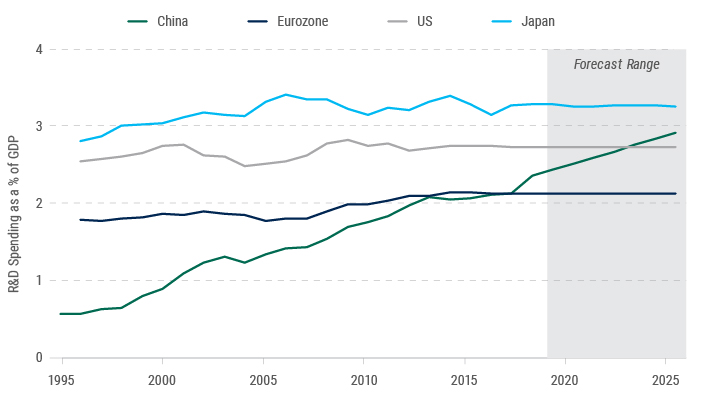 Source: World Bank, China Ministry of Science and Technology as of Feb 1, 2019. PPP – purchasing power parity. For illustrative purposes only. We are not soliciting or recommending any action based on this material. Any opinions, projections, estimates, forecasts and forward-looking statements are valid only as of the date of this document and are subject to change.

Chinese Demand for Industrial Robots Is the Highest in the World 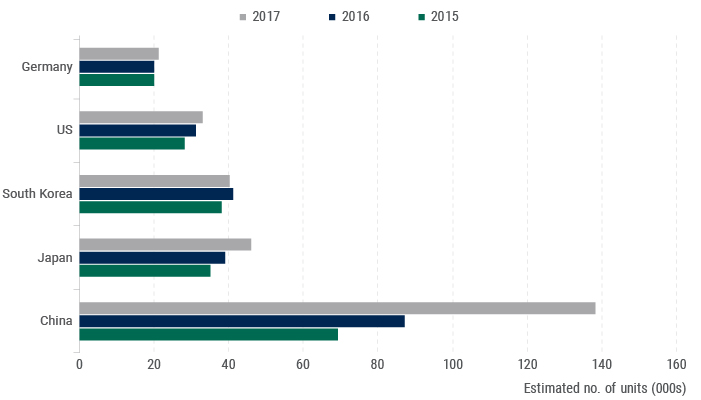 Source: International Federation of Robotics, as of October 2018. For illustrative purposes only. We are not soliciting or recommending any action based on this material.

We expect China to broaden its regional economic ties with its ambitious “Belt and Road” initiative – a massive infrastructure project totaling in the trillions of dollars. Hailed by China’s President Xi Jinping as the project of the century, One Belt, One Road is expected to deepen Asian integration by linking nearly 70 countries and widen China’s access to Europe, the Middle East, and Africa. The initiative will cover about a quarter of all the goods and services the world moves.7 If successful, the initiative could be the largest trading collaboration seen in many years, delivering a powerful transformative effect for regional exports, construction companies, and banks for many years to come. 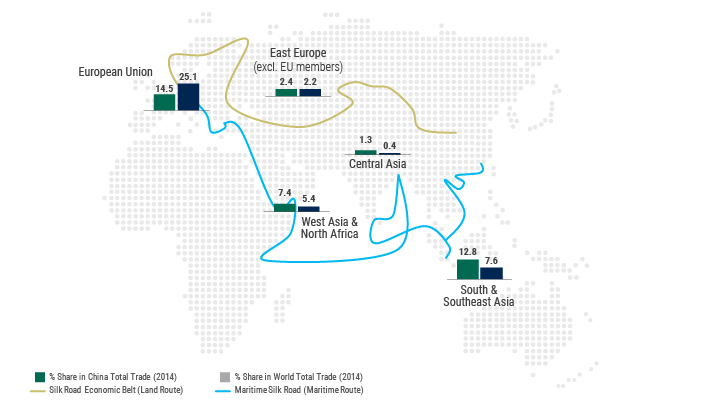 Source: Ministry of Commerce, IMF, BHP, Bloomberg; as of 31 Jan 2018. For illustrative purposes only. We are not soliciting or recommending any action based on this material.

Once a rather opaque institution, the Chinese financial sector has undergone several reforms that have made it more accessible than ever before.

If China’s past three decades were about progression, the next decade will be about innovation. We believe China’s economic story is an exciting one where consumers are at the forefront of China’s new economy, spurring domestically driven innovation as companies become global leaders in their respective fields. At the same time, China is becoming more international, expanding its regional economic ties through the Belt and Road initiative and undertaking market-friendly reforms to its financial sector. It’s a powerful story that will directly change the lives of 1.5 billion people and present an unparalleled opportunity for investors.

Established in 2004, Huatai-PineBridge is a joint venture between major stakeholders Huatai Securities and PineBridge Investments. Headquartered in Shanghai, the company has branch offices in Beijing and Shenzhen and manages approximately US$16.0 billion* of assets, as of 31 December 2018.

Investing involves risk, including possible loss of principal. The information presented herein is for illustrative purposes only and should not be considered reflective of any particular security, strategy, or investment product. It represents a general assessment of the markets at a specific time and is not a guarantee of future performance results or market movement. This material does not constitute investment, financial, legal, tax, or other advice; investment research or a product of any research department; an offer to sell, or the solicitation of an offer to purchase any security or interest in a fund; or a recommendation for any investment product or strategy. PineBridge Investments is not soliciting or recommending any action based on information in this document. Any opinions, projections, or forward-looking statements expressed herein are solely those of the author, may differ from the views or opinions expressed by other areas of PineBridge Investments, and are only for general informational purposes as of the date indicated. Views may be based on third-party data that has not been independently verified. PineBridge Investments does not approve of or endorse any republication of this material. You are solely responsible for deciding whether any investment product or strategy is appropriate for you based upon your investment goals, financial situation and tolerance for risk.